One of “the least of these”

It starts with seeing the sweet face of a child and feeling that pull to share the love of Christ by making sure that child gets an education, a good meal and an opportunity to accept the Savior of his or her precious soul.  As we step forward to do what we can to bless this child, as we write a check from our abundance, as we pray for that child… that child whose picture we see on our refrigerator finds a place in our hearts.  We want to understand what life is really like for him or her, to know their struggles.

It was a privilege to receive a bit of an education about these things during our trip to Haiti.  There is so much more to learn about a culture so different from our own, but here are a few things we thought our sponsors would like to know in order to better understand the children you have chosen to bless.

School- The general attitude about school is very different in Haiti than in America.  That yearly back-to-school tradition that is such a big deal in America is non-existent.  Despite that fact, school is looked upon as a privilege instead of as a right in Haiti.  Children know that they have a chance at a better life if they do well in school. They tend to appreciate the opportunity and work hard to do well.   Many children asked for prayer that they would be successful in school. 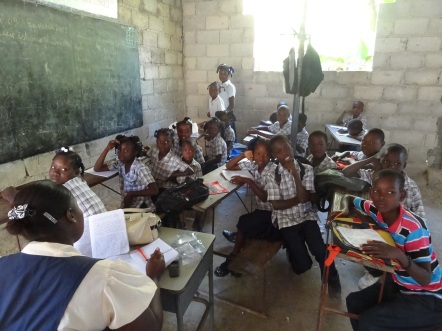 Family- The role of the nuclear family is not as prominent in Haiti as it is in America.  Because of the general poverty of most people, it is very common to send a child to a relative who may be better able to feed and take care of them. We also saw a lot of children with step-families; sometimes due to the death of a parent, sometimes due to divorce.  Several children have close to 20 siblings, usually not from the same parents.  We also discovered that many children do not know their birthdates.

Earning an income– Most adults in the village do have some kind of a job.  As we asked the children what his or her caregiver does for a living, many told us that they sell things in the market or on the street.  As we drove around Haiti we saw many people sitting by the side of the road selling things– produce, candy, shoes and clothing, even electronics.  The market is very similar to what we would call a flea market.

This is the market right outside the village of Carrefour Poy. It was not open when I took this picture so you can see all the booths from which people sell their wares.

Most towns have 2 or 3 days per week when the market is open and the sellers set up their wares in a roughly built booth which they rent for a small fee.  It struck me that it would be very difficult to make a profit when there are so many others selling the same items in such a small area.

Several children said their parent is a builder.  However in a country so poor there are not many jobs for builders.  Sometimes they are hired by the government, but very often do not have any work. Several times as we drove through Carrefour Poy toward the school, we saw a man sitting on a pile of rocks, breaking them up into smaller pieces.  I believe this is the job of a mason.  We knew from the beginning that the father of 2 of our children is a voodoo priest.  However we were told that there are actually several children in the school whose parents are involved in voodoo.

As I said, there is so much to learn, but hopefully this little bit of information will help you understand the life of your sponsored child just a little bit better.  Seeing firsthand what life is like for in Carrefour Poy makes us so much more grateful for your generosity as a sponsor.  You truly are making a difference!  Thank you.