Life is just rushing by and I haven’t had a chance to finish updating our sponsors and friends about all of the exciting things that happened while we were in Haiti this summer.  To finally continue, in this post, my son Brennan will share with you the story of the basketball hoop.

I really like basketball and since other people do sports ministries, like our friends Luke & Becca who have a soccor ministry in Malawi, that got me wanting to do something with basketball.  I was able to raise money by collecting donations and doing jobs to earn money.  Most of that money went toward the cost of the trip, but I also earned some extra to pay for the hoop.  Then I found out that someone donated it!

When we got it there I couldn’t wait to put it up, but we had to wait until Tuesday because that’s when the rest of the team would be there to hang it.

When we got to Carrefour Poy, we saw that the wall wasn’t high enough for a basketball hoop and the ground was muddy and rocky with roots sticking up from a nearby mango tree. We talked to Claudel and Pastor Gilbert who made some phone calls that we couldn’t understand.

Discussing the placement of the court.

After a while, the man who lives next door to the school came with an ax and began chopping up the roots.

Then he skillfully climbed the tree and chopped down a branch that was in the way.

Chopping down a branch from the mango tree to make space for the basketball court.

While he was doing that, someone drove away in Gilbert’s car and came back with a trunk load of bricks.

Some of the school boys unloading bricks from the back of Gilbert’s car.

After the bricks were unloaded, some men from the village started building the wall.

One of the boys sifted dirt…

to mix the mortar with… 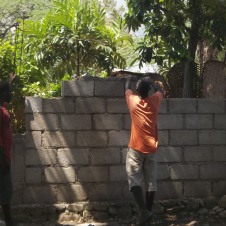 so the wall could be built up!

Then, one of the kids who goes to the school started bringing wheelbarrows full of gravel to use for the cement for the court.  Thankfully, the money I had raised for the basketball hoop was available for all the supplies and to pay the people who did the work!

By then it was late and we had to go back to Gilbert’s house, so unfortunately we weren’t able to see the cement being poured.

The next day the rest of the team arrived in Haiti and  I was very glad to see other kids who spoke English!  While collecting all the luggage at the airport, we found out it had been quite an adventure getting the basketball hoop there.   The airline workers said that they can’t transport that big of a box.  After a long discussion trying to come up with solution, Christian, the leader of the team, asked if it could be transported out of the box.  The lady said “Yes, of course that will work.” So they took it out and put all the bolts and brackets in separate suitcases.  Thankfully, it all got there safely!

All ready for the hoop to be hung!

On Tuesday when we got to Carrefour Poy to teach VBS the wall and cement was all finished and ready for the hoop to be hung!  After the VBS was over, several of the team members and I put the basketball hoop up.  While we were working, we discovered that the battery powered drill that Gilbert had wasn’t strong enough to drill through the cement wall.  We had to get another drill and plug it into the generator that they have at the school.

Brian securing the brackets to the wall.

After all the bolts and the framing were installed, I got to attach the backboard.  I also got to put the netting on the hoop before it was attached to the backboard. 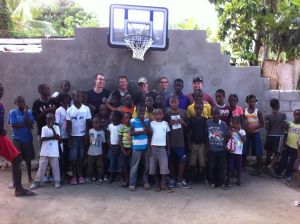 Kyle, Brian Sr., Brian Jr., Brennan and Christian on the court with a group of kids in Carrefour Poy.

All the kids were so happy that once the basketballs were pumped up, we immediately started playing. Even though the Haitians didn’t know all the rules, they knew the gist of the game, and we had a lot of fun! 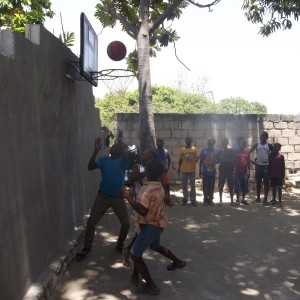 A group of kids enjoying the basketball court!

*Special thanks to Mike Stromberg, Brian Whaling Sr and Jr, and Kyle Catto for helping with this project, as well as the whole team for making sure the hoop made it to Haiti!

One thought on “Hoop Dreams”